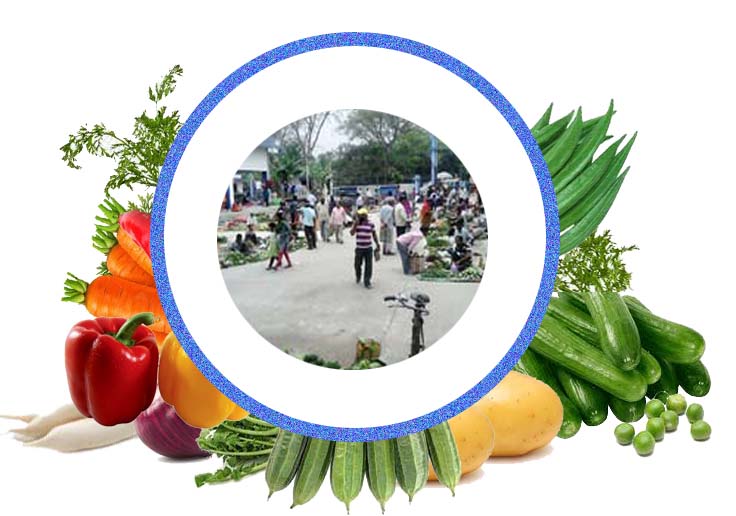 West Bengal is enriched with different agricultural commodities. By profession a large number of people belongs to farm commodities. Earlier it was noticed that due to the scarcity of suitable market as well as modernized marketing facilities, the farmers did not get better remunerated prices against their commodities. Due to circumstantial compulsion they used to make distressed sale against their commodities. Considering the situation the decision for construction of Krishak Bazar was taken.
A dream project of Government of West Bengal in the year 2012 was undertaken by Agricultural Marketing Department for establishment of Krishak Bazars in different blocks of the districts with a view to facilitating the marketing management of Agricultural products so that farmers of the locality can get remunerative price of their produces and consumer of the locality may get the produces at comparatively lower price. West Bengal State Marketing Board now West Bengal State Agricultural Marketing Board was entrusted with execution of the works as implementing agency of Agriculture Department and Agricultural Marketing Department. As decided by the Government construction of 186 Krishak Bazars have been completed at a total project cost of Rs. 108000.00 Lakh under RIDF & RKVY scheme. Each Krishak Bazar has (i) Administrative Building (ii) Krishak Sahayak Kendra (iii) Auction Hall (iv) Godown (vi) Open market shed (vii) Stall (viii) Weigh bridge with operating room (ix) internal concrete road (x) toilet (xi) garbage vat (xii) security room. After completion all the Krishak Bazars have been handed over to the Zilla Regulated Market Committee / Regulated Market Committee.
All Krishak Bazars are functioning either by market sitting, paddy procurement, functioning of stalls and or by alternative use. e-NAM Project has been implemented in 15 of such Krishak Bazars.